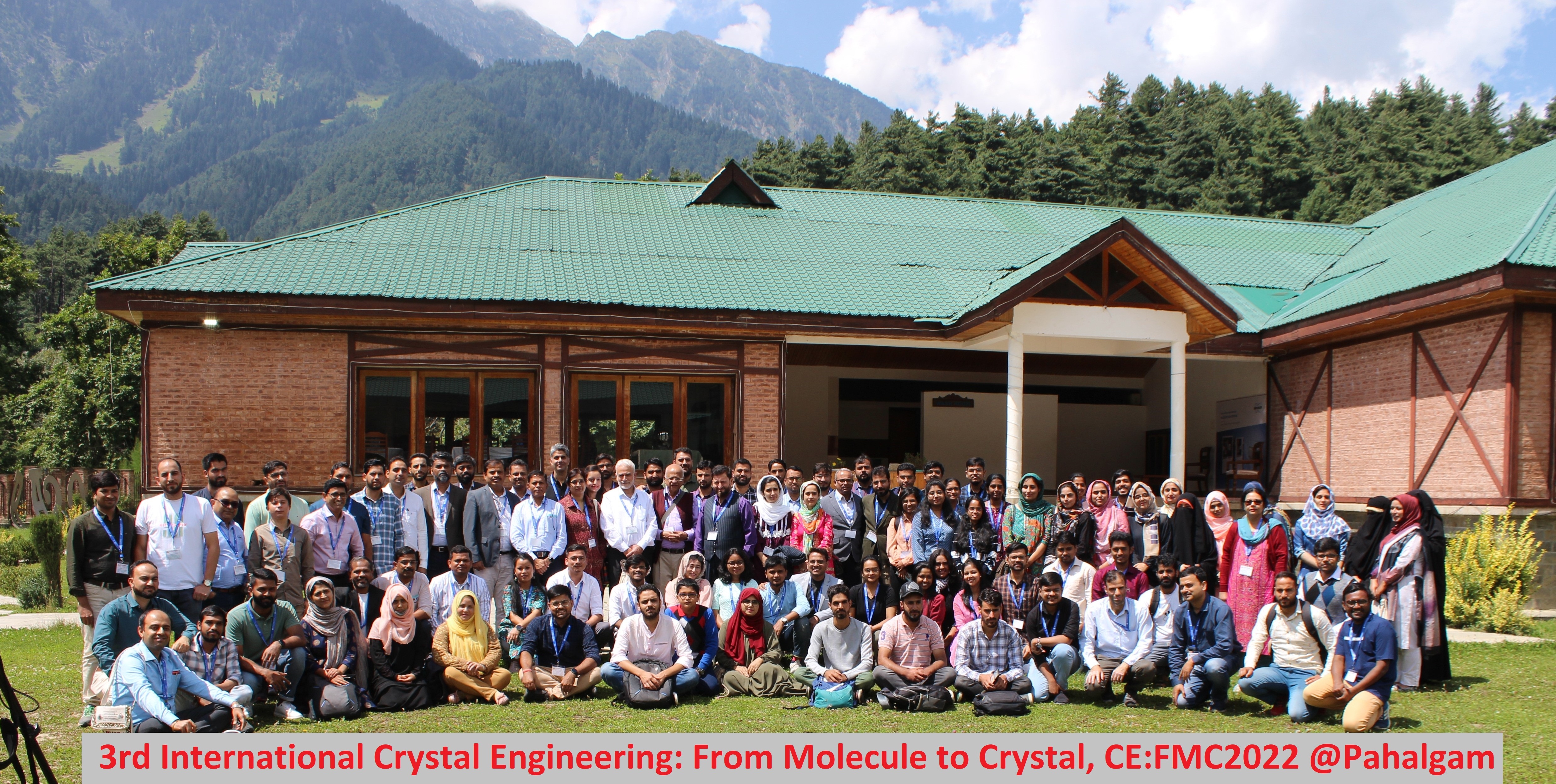 Scientific meetings and conferences are opportunities to share scientific discoveries and developments for the benefit and growth of the subject. Additionally, meetings provide the next generation of scholars with an opportunity to connect with the community. Meetings are essential, hence a regular scientific custom. The history of encounters cannot be traced precisely, but legendary encounters have been reported since the days of Robert Boyle, officially the first chemist. The fall 1774 one-on-one meeting between Priestly and Lavoisier, later gave definitive contributions to the discovery of oxygen and claimed the title of the father of modern chemistry. Likewise, from the beginning of 1640, a group of scientists continued to meet somewhere in London, which eventually led to the establishment of the Royal Society of Chemistry (RSC) in London. Scientific associations like American Chemical Societies (ACS), IUPAC, IUCr, Indian Science Academies, etc., emerged from similar meetings. Meetings are now more organized and thematic.

Department of Chemistry, University of Kashmir and Department of Chemical Sciences, IISER Kolkata recently organized an international meeting on the subject of crystal engineering: “Crystal Engineering: From Molecule to Function [CE:FMC2022]at the captivating hill station of Pahalgam, from 31 August to 02 September 2022. The conference was an extension of the series, started in 2020, to provide the Indian crystal engineering community with an opportunity to come together and discuss fundamental concepts as well as the latest developments in the field.The lecture series offers new researchers and scholars the opportunity to connect and interact with senior scientists working in the field and a platform for collaborations The first conference was held at NIT-Raipur (Senior Lecturer: Prof. Desiraju and Organizer: Dr. Kafeel Ahmad Siddiqui) in 2019 and due to the Covid-19 pandemic, the 2nd conference in the series was been organized virtually on the Zoom platform (Main Patron: Prof. Desiraju and Organizer: Prof. K. Bridha-IIT Kharagpur and Prof. CM Reddy-ISER Kolkata). the second wave of the COVID-19 pandemic in 2021, the conference was not organized. As the world slowly returned to normal and physical meetings resumed, it was decided to hold the 3rd meeting of the franchise in Kashmir. Prof. CM Reddy (Head of Department of Chemical Sciences, IISER-Kolkata) and myself (Dr. Dar Aijaz, Assistant Professor, Department of Chemistry, University of Kashmir) took charge of arranging and acting as as coordinators of this very important meeting. in Kashmir.

Kashmir is a very suitable place for such conferences; however, there are not enough examples of such meetings outside of academic institutions or SKICC. Taking such meetings to the congenial venues of Kashmir would bring multiple benefits such as absence of unwanted audience, more effective conversations among attendees, promotion of academic tourism in Kashmir and re-energizing attendees. Therefore, we settled with the Pahalgam club, as our meeting place. Knowing that it was always difficult to coordinate and organize such a high-profile meeting off-site, however, despite the obstacles, we held on until the meeting website was launched. American Chemical Society (ACS), Royal Society of Chemistry (RSC), Bruker, DST-SERB India, IR Tech, Inventis and Crystallography in India Association answered our call and supported the meeting. Incidentally, the only local support came from BM Scientific, a chain of small-scale suppliers operating in Kashmir, when delivering the first sponsorship note. After 3 months of low-key work, we had a joint dinner with visiting scientists on August 30, 2022, in the club’s spectacular dining room, to hear how guests were tempted by the beauty of Kashmir. Twenty-five university researchers from the department volunteered for the meeting and their enthusiasm and determination were exemplary. The transport team was led by Ishtiyaq and Umer, the auditorium team by two Adils, the recording team by Aliya, Shaista and Pawandeep and the poster team by another Adil. We all worked past midnight in the auditorium to get everything in place before heading off to a restless sleep.

The technical schedule was precise and the result of constant virtual discussions within the organizing team. We made sure everything is in place with the best achievable perfection. The next morning, as the auditorium filled with a cheering crowd, our team was intrigued until the match kicked off with a bang; my opening remarks were followed by remarks from Prof. Malla (Coordinator), Prof. Syed Wajaht Amin Shah (Head of Department of Chemistry), Prof. Farooq A. Masoodi (Dean of Studies, University of Kashmir) and Prof. Gautam R. Desijau, (Patron). The first technical session of the meeting was chaired by Prof. Farooq Masoodi and began with the keynote address by Prof. Desiraju. Prof. GR Desiraju is a world famous Indian scientist and one of the founders of crystal engineering. He was president of the International Union of Crystallography (IUCr) and played a central role in transmitting key definitions such as the supramolecular synthon, hydrogen bonding, etc.

His famous works include a textbook on weak hydrogen bonding and the first textbook on and in the field of crystal engineering. Professor Desiraju stands out among the current generation of Indian scientists for pioneering the discipline rather than adding to discoveries. He spoke of reminiscences of the early days of crystal engineering and shared his experiences and struggle to establish the discipline and appreciated the current state of the subject in India and globally. Crystal Engineering is about building crystals with a purpose and the most important application of Crystal Engineering is to make better and cheaper medicines for ordinary people,” the professor said. He stressed that it is important for people working in the region to be known to their tribe and that the establishment of links in the tribe is essential, for which this meeting in Kashmir is an important platform. The meeting brought together the editors of Crystal Engineering’s two top journals: Crystal Engineering and Communications (RSC) and Crystal Growth and Design (ACS) and other eminent scientists. Professor Desiraju advised them to take the inheritance further and help the subject and the tribe grow.

“A first of its kind, the meeting had all the flavors of scientific meetings held in Europe or the United States and I believe that it will help academic developments in Kashmir, particularly with regard to the approach of the new generation towards applied sciences,” Prof. Reddy said in his closing remarks. Prof. Desiraju described the meeting as a very important meeting held in Kashmir and explained how off-campus meetings are more productive. The guest speakers and scholars described the meeting as a very successful venture which helped them to understand the advancements and latest trends in the field of crystal engineering and to experience the exciting place of Pahalgam.The participation of local students was ensured and the masters students from the Department of Chemistry were transported to Pahalgam in turn to gain the experience of attending the meeting and have interactions in face to face with scientists and participants.

The main objectives achieved included: i) one of the first international academic conferences was organized in Pahalgam by University of Kashmir and IISER Kolkata, ii) participants appreciated the efforts and described the meeting as one best experiences of their life, iii) many channels of collaboration and exchange of students have opened up between the University of Kashmir and other eminent scientific institutions in the country including IIT Jammu, iv) the crystal engineering community of India shared the platform and young scholars were introduced to the tribe and v) our masters students and university scholars had the opportunity to listen and interact with the pillars of the region.