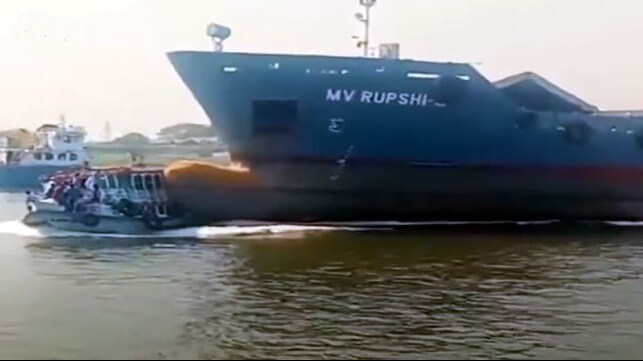 
Eight bodies have been found in the latest ferry accident in Bangladesh, in which a cargo ship sank on a small river ferry about 12 miles from the capital, Dhaka. Officials say they believe at least four people are still missing, while admitting they did not know how many people were on board the crowded ferry. The captain and seven crew members of the freighter have been arrested while the investigation is ongoing.

Onlookers watched in horror as the freighter named Ruposhi-9 first dragged the ferry laden with people along the river. The small ferry, named Mr. Asraf Uddin, carried between 30 and 50 or even 60 people. The ferry was operating in an industrial area known as Al Aminnagar when it snagged on the bulbous bow of the larger freighter.

Early footage of the crash shows the ferry being pushed down the river while people can be heard screaming before the ferry begins to capsize and people are thrown into the river. The fire and civil protection services responded to the scene and later reported that around 15 to 20 people were able to swim to safety. A rescue vessel from the Bangladesh Inland Waters and Transport Authority also combed the river while three divers searched the area.

Naval police reported seizing the cargo ship shortly after the crash, which happened around 2.30pm on Sunday March 20. On Monday, the captain, engineer and six other crew members of the freighter were arrested and brought before a court which ordered their detention for seven days while the investigation continues.

On Monday, the Water Transport Authority also reported that it had recovered the ferry which had sunk in the river. No additional bodies were found on the ferry, but the authority has taken steps to suspend ferry service while the investigation is ongoing.

“Lack of skill of launchers, negligence, small size of vessels are some of the many reasons for the suspension of launch movements on this route,” said Masud Kamal, co-manager of BIWTA Narayanganj river port.

Ferries remain a common means of transport in Bangladesh despite a poor safety record. Authorities estimate that over the past 30 years there have been 550 ferry accidents on Bangladesh’s waterways, resulting in around 3,600 deaths and more than 500 more people missing. In December 2021, at least 49 people were killed and many more injured when a fire broke out on a ferry operating in a remote region in the south of the country. Another ferry collision in August 2021 claimed 21 lives while in April 2021, 27 were killed in a ferry collision.

The University of Texas at El Paso College of Engineering