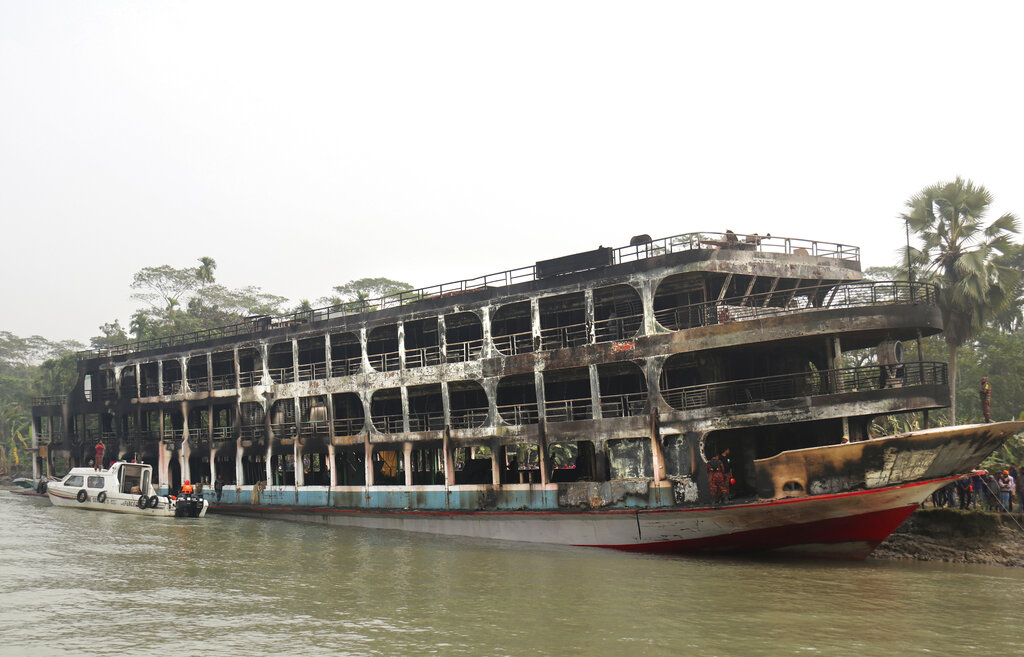 DHAKA, Bangladesh (AP) – Bangladeshi authorities buried 23 unclaimed bodies on Saturday after a day’s search failed to find more victims or survivors of a massive fire on a crowded river ferry that left 40 dead.

Habibur Rahman, a senior government official, said he had an incomplete list of 17 missing people who were on the ferry on Friday when the fire woke passengers up around 3 a.m., forcing many to jump in cold waters and to swim ashore.

Divers searched for other survivors before halting their efforts as the sun set on Saturday.

Rahman said 50 people were being treated at two hospitals, while 19 others were sent home.

Dr Samanta Lal Sen, chief coordinator of the Sheikh Hasina National Institute of Burns and Plastic Surgery in Dhaka, said his hospital is treating 15 people for severe burns. â€œI would say everyone is critical and no one is out of danger,â€ he said.

Thirty-five injured at another hospital in Barishal were out of danger, hospital director Dr Saiful Isalm said.

Investigators inspected the fire-ravaged MV Abhijan-10 ferry, and one of them, Mohammed Tofayel Islam, said he found faults in the engine room. “We are trying to find other possible reasons,” he said.

It took 15 fire trucks several hours to bring the blaze under control and cool the ship, according to fire officer Kamal Uddin Bhuiyan, who led the rescue operation. Subsequently, the blackened hull of the ferry was anchored to the riverside as many anxious relatives gathered on the shores.

The ferry was carrying some 800 passengers, many of whom were traveling to visit family and friends for the weekend, officials said.

Police officer Moinul Haque said rescuers recovered 37 bodies from the river, while two people died from burns on their way to hospital. Another injured passenger died overnight in a hospital in Dhaka.

The ferry was traveling from Dhaka to Barguna, about 250 kilometers (155 miles) to the south. It caught fire off the coast of Jhalokati District on the Sugandha River near the end of the trip.

Ferries are one of the main modes of transportation in Bangladesh, which is crisscrossed by around 130 rivers, and accidents involving ships are common, often blamed on overcrowding or lax safety regulations. In April, 25 people died after a ferry collided with another ship and capsized outside Dhaka.

New timetables announced for public transport services as of January 3