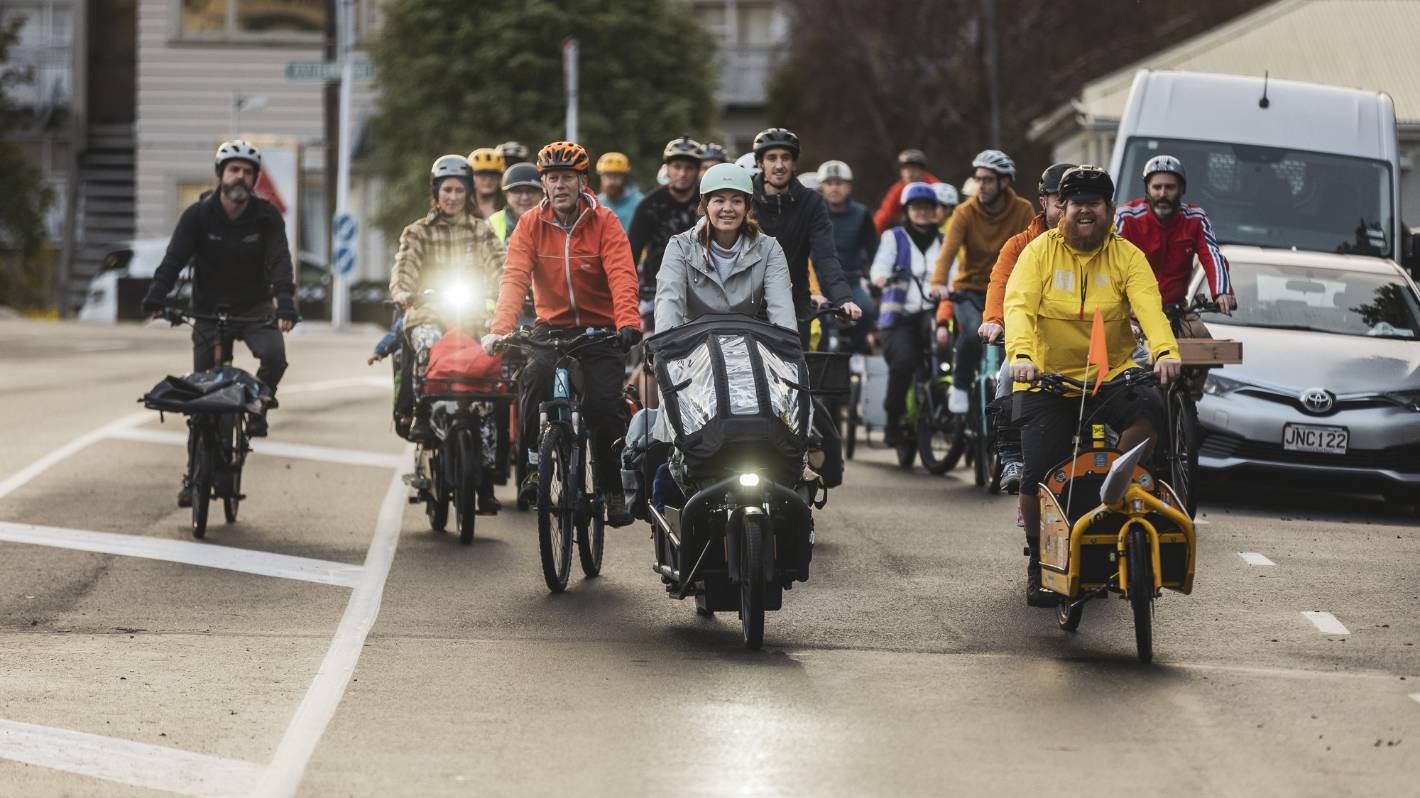 Around 80 people, including Green MP Julie Anne Genter, cycled for a school run in Newtown on Friday morning to celebrate World Bike Day.

She may only be 5 years old, but Ada Burgess is the proud owner of a seven-speed bike.

Family biking. Dad James Burgess rides a cargo bike to work on Taranaki St from their home near Berhampore in Wellington.

He found the bike to be an efficient way to get around and he didn’t have to worry about parking or traffic jams.

“I just wanted to use the car less around town and I like to ride the bike anyway,” he said. The cargo bike is made for beautiful rides in the city.

The father and daughter duo were part of a cycling school of around 80 people in Newtown on Friday morning to celebrate World Bike Day.

READ MORE:
* Mode Change: Happy commuters have a sense of control, and two wheels, not four
* Changing mode: Scooters – from lazy novelty to eco-friendly and affordable transportation
* Fashion change: our streets must be safe for everyone

The convoy set off from Newtown Park around 8am and headed for Roy St and Mansfield St, before turning onto Riddiford St and driving towards the local school.

Newtown resident Katia Guiloff went on the ride with her partner Jamie Hoare and her children, Rimu, 4, and Alma, 2.

Cycling to work was nothing new for Guiloff – she did it all the time in her home country of Chile and continued it in Wellington. She, too, liked not to deal with parking and heavy traffic, and said it was good for her health.

Changing fashions: Wellington’s conscious commuters explain why they cycle and scooter to and around the capital.

“It at least makes me happy to use this energy in my body,” she said.

She supported a dedicated cycle lane in Newtown, saying it would make people feel safe.

“I know a lot of people who just don’t dare to hit the road, especially with young children, because there’s no room for them,” she says.

The High Court on Friday issued an interim order halting construction of the Newtown cycleway and bus lane to the city until a full hearing in September.

Dan Mikkelsen, owner of bicycle shop Bicycle Junction, said the company had received many requests from people who wanted a cargo bike but were reluctant because they felt riding on the roads was too dangerous.

Friday’s school run was just ‘tip of the iceberg’ in terms of Wellington families riding bicycles for transport, and if more families did school runs on two wheels it would free up a lot of space for others on the road.

“We all know how busy it gets in the afternoon when it’s school pick-up time and how congested it gets – imagine if kids were picked up on bikes , you wouldn’t have that congestion,” Mikklesen said.

“We know things have to change. You just can’t keep doing the same things.