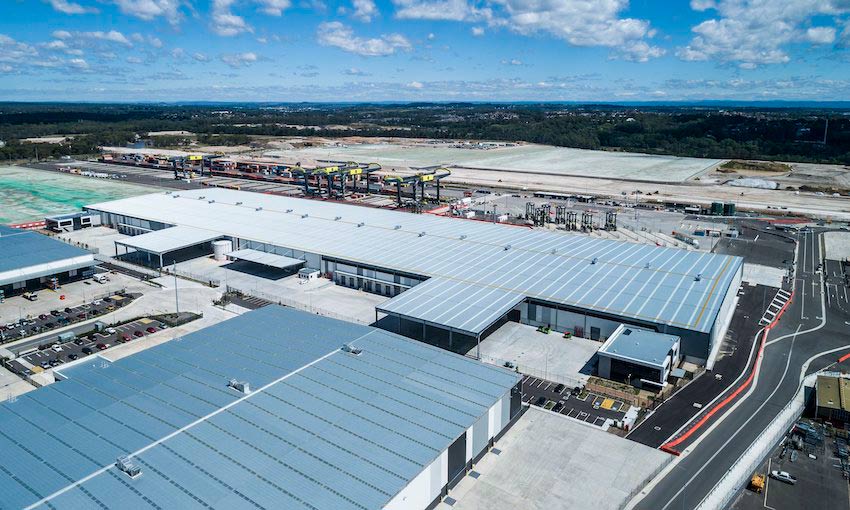 MLP is the nation’s largest intermodal freight facility and is well positioned to become a fully automated port-to-site rail link. Construction of the Moorebank Interstate Intermodal Terminal began in April of this year.

The solar installation will be installed as part of a 30-year partnership between Logos and the renewable energy fund Solar Bay.

Solar Bay plans to install 60 megawatts of rooftop solar across the estate and 150 megawatt hours of battery energy storage to feed renewable electricity to the grid.

The combined power of solar and battery power on the roof is expected to generate enough clean energy to power the equivalent of 40,000 homes in New South Wales.

Once fully operational, the solar micro-grid could be able to supply all of the enclosure’s energy needs during the day and source electricity from an off-site wind farm to supply electricity renewable outside peak solar production periods.

“The impacts of the infrastructure we will develop with Solar Bay at MLP will extend far beyond the site itself and will play a key role in national, regional and local economies given the size, scale and the influence of our market-leading site,” says Searle.

“It also provides a substantial opportunity for MLP tenants, where they seek to run their own business operations on a carbon-neutral mandate.

“The Logos Consortium will develop and finance the construction of the on-board network, with our long-term partnership with Solar Bay ensuring the continued operation of this network.

“This maximizes results for everyone involved – from Solar Bay as operator, to Logos as investment and development manager, to our tenants, with MLP’s economies of scale providing a distinct and leading advantage. market with the amount of renewable energy supplied via a microgrid.

“We look forward to continuing to contribute to the continued innovation in the logistics industry globally.”

Logos said the announcement of Australia’s renewable energy sector will bring environmental benefits and innovation in the future.

“Our partnership with Solar Bay will allow the Logos Consortium to use the latest technologies so that we can more efficiently generate, store, manage and use energy on site at MLP and run all warehouse operations with 100% energy. renewable.”

“A precinct-scale microgrid facilitates the on-site installation of large-scale solar panels and batteries, providing tenants with the ability to access a large amount of renewable electricity that matches the scale of their electrified operations.

“With over 800,000 square meters of possible solar roof, we can also contribute to the decarbonisation of transport and use excess production to produce low-emission fuels such as hydrogen.

“Solar Bay is thrilled to be part of deploying MLP’s renewable infrastructure and seeing it set a strong precedent for what is possible in industrial areas in the future. »

Logos and its consortium partners, AustralianSuper, Ivanhoé Cambridge and TCorp completed their acquisition of MLP for $1.67 billion on December 15, 2021.

The estimated final value of the logistics park is $4.2 billion once the site is fully developed.