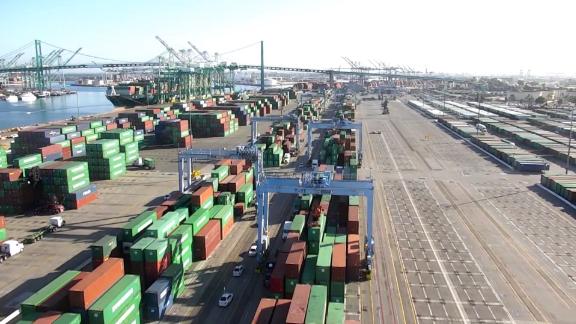 The congestion of the huge container ships outside the two busiest US ports in Southern California has been blamed for all sorts of things:

Now this may have been the cause of a major oil spill off the coast of Orange County, California.

As authorities scramble to contain damage from a broken undersea pipeline that sent oil to beaches and endangered fauna, they are also investigating the possibility that the leak was caused by a ship’s anchor hitting the pipeline.

At a press conference Monday, Martyn Willsher, CEO of Amplify Energy, owner of the pipeline that dumped up to 144,000 gallons of oil into the ocean, said it was a “possibility obvious “that the damage was caused by a ship’s anchor.

Tuesday, the Department of Transportation, which oversees pipeline accidents, informed Amplify that although “the root cause of the accident has not been confirmed at this time”, that “preliminary reports indicate that the failure may have been caused by an anchor that caught the pipeline, causing a partial tear. “

Authorities confirmed to the public on Tuesday that divers had discovered that a “4,000-foot section of the 17.7-mile-long pipeline had been moved with a maximum lateral movement of about 105 feet.”

“The pipeline has basically been pulled like a bowstring,” Willsher said.

Asked at a briefing Tuesday about speculation that the anchor of a container ship was the cause of the rupture, U.S. Coast Guard Captain Rebecca Ore said there was no confirmation of a vessel above the spill site, but the response team is working with other agencies in a parallel investigation to determine if a vessel was in the area.

Officials said even with congestion in the area, ships should have been able to bypass the pipeline. Ships should only anchor in designated areas and pipelines are clearly marked on nautical charts, said Coast Guard Master Steve Strohmaier.

What is clear is that the waters off the ports of Los Angeles and Long Beach are clogged by an unprecedented number of container ships who have cast their anchors while waiting to enter the port, due to the imbalance in the country’s various supply chains that has occurred with the protracted pandemic.

The number of ships awaiting berthing fluctuates. At the end of last week, when the accident appeared to have happened, 64 container ships were waiting offshore to embark at the Port of Los Angeles – the country’s largest port – and its neighboring port of Long Beach, which is right behind it in terms of cargo volume. That number had risen to 76 ships on Monday, before falling to 62 on Tuesday.

It now takes an average of 10 days for ships to enter ports to unload and reload freight containers. Before the pandemic, ships usually arrived and headed straight for a berth in one of the two ports.

“It’s like taking 10 lanes of freeway traffic and moving them out of five when the cargo arrives at the port,” Gene Seroka, executive director of the Port of Los Angeles, told CNN International on Tuesday. “We are struggling to absorb all this cargo in the US supply chain.”

The problems are caused by a lack of truck drivers transport containers to lack of workers in warehouses to which the goods are intended, and a lack of empty containers in the right parts of the world.

Consumers’ purchasing habits have also changed dramatically during the pandemic, as they spend less money on services and therefore more money on goods that need to be physically moved.

“What you are seeing is the purchasing power of American consumers displayed,” Seroka said.

The pipeline accident has the potential to release more oil into the ocean than any spill since the Deepwater Horizon disaster in 2010. California Governor Gavin Newsom has declared a state of emergency.

Even though it turns out that a ship’s anchor was not the cause of the pipeline rupture and the resulting oil spill, the recoil of ships and trucks in ports is making the situation worse. air quality in southern California, experts say.

A June report from the California Air Resources Board found that the backlog of ships awaiting berthing is causing “Substantial implications for port communities of increased particulate emissions, as well as contributions to smog-generating oxides.” And there were about 40 ships a day waiting to enter port in June when the report was released. Now more than 60 are waiting.

El Pasoan, 1 other killed after cargo plane crash in Georgia