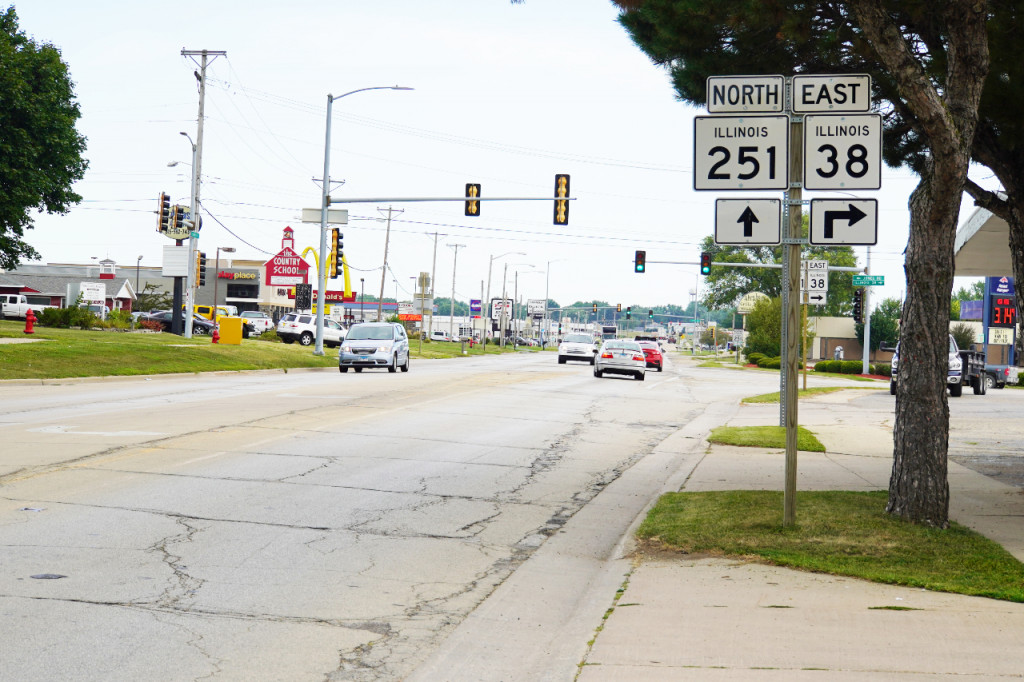 ROCHELLE — City of Rochelle Engineer Sam Tesreau said Wednesday that the Illinois Department of Transportation is in the engineering phase of a project to rebuild Illinois Route 251 through the northern part of the city.

The deteriorated section of the state-owned road will see a widening to five lanes with two-way turning lanes from Fairview Drive south to the location of the new Starbucks. City officials meet with IDOT quarterly to discuss the future project. IDOT owns and maintains the route, and city officials hope to see it rebuilt as soon as possible.

Tesreau said the state determines right-of-way requirements for what it will need to acquire for the project and that at least a dozen parcels will need to be acquired.

“They’re talking about preliminary plans by April next year,” Tesreau said. “And then we’ll start looking at them for any utility items that need to be moved into the right-of-way to accommodate future building needs. The plans will probably be four months out. I’m going to say August 2023 we’ll be done the final plans.

That doesn’t necessarily mean construction will begin during or just after August 2023, Tesreau said. Acquiring a right of way can sometimes be a long process, he said.

Tesreau said he was satisfied with the progress of the project. It’s been almost 18 years since the city engineer wrote his first letter to IDOT regarding concerns about the stretch of road. The city also plans to build pedestrian walkways in the area when the project comes to fruition.

“It’s been positive so far and the coordination meetings are helping and we’re trying to push them and help them in any way we can,” Tesreau said. “Because it’s important for the community as much as it is for IDOT. We would like to see all of this improved and urbanized and allow this corridor to develop so that it is beneficial and good for the city in terms of sales tax and property tax and development in general. »

Rochelle City Manager Jeff Fiegenschuh said the city’s efforts to see the stretch of road rebuilt included talking to state lawmakers and asking for quarterly meetings. He wants the state to continue to understand the importance of the project for the city.

Fiegenschuh is happy that the state is considering rebuilding and widening the road. Tesreau thinks the reconstruction could take 18 to 20 years before more maintenance is needed.

“It will be much better to have a widened road with new street lighting and banners,” Fiegenschuh said. “I love the idea of ​​having additional pedestrian access. This is the part I’m most excited about getting people to get from Flagg Road to Illinois Route 38.

The city has a minor maintenance agreement with IDOT that includes simple patching of potholes and snow removal and tracing.

“This piece is way beyond maintenance now,” Tesreau said. “For us, this will mean less maintenance for a new facility along this stretch. It should be noted that the city will participate in the cost of this with the construction of the sidewalks, because it is important for us, and then the new streetlights that will pass through there. It will be a very nice addition to this hallway.

Tesreau called the 18-year wait for improvements to the stretch of road “extremely frustrating.” Getting back on track now has been encouraging for him.

“It can be frustrating to see other national roads being built in the area,” Tesreau said. “We have been asking for our share of the money for a long time and we are not there yet for the construction. Just to see the actual development of the plans coming together and such is the biggest chunk. I’ve always said that once you get to the build, that’s the easy part.