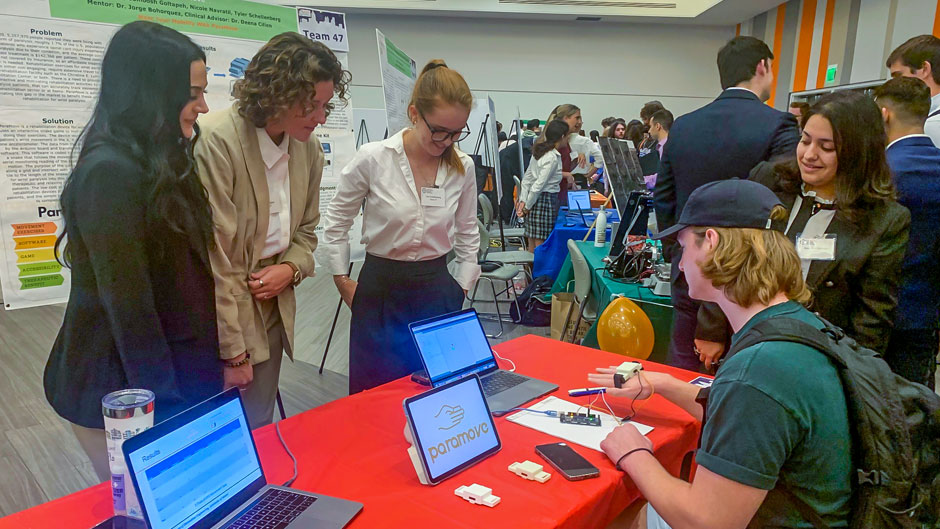 From an air transport system on Mars to a new way to rehabilitate wrist paralysis, College of Engineering graduates presented their flagship projects.

The maneuver was a little tricky at first, but Samuel Feuer stuck to it.

With a video game-like controller strapped to his right hand, he manipulated the animated image of a green worm that appeared on a computer screen in front of him, moving his wrist to the left until the creature swiped. come close enough to an apple to pick it up. a big bite.

But after each nibble, the apple would move to a different spot on the screen, requiring Feuer to perform another hand motion to chase the fruit away.

As some might say, it was all in the wrist.

For patients with spinal cord injuries, however, wrist movements, so essential to performing a variety of tasks, can be challenging. And the rehabilitation process for such a condition, if patients can afford it, can be uninviting and require long trips to a rehabilitation center.

That’s why a team of four University of Miami biomedical engineering students, focused on the goal of improving wrist function in paralyzed patients, created an interactive, easy-to-use rehabilitation device.

ParaMove uses a wearable accelerometer attached to the hand to track wrist movements at different axis points, feeding the data to encoding software that converts the movements into video game-like graphics of a snake and an apple.

It was one of 57 projects featured at the College of Engineering’s Senior Design Expo, a showcase of capstone projects developed by senior graduates across all engineering disciplines.

A development plan to combat the effects of climate change in a Miami community, an analysis tool to determine whether the presence of specialized surgical teams would increase the efficiency of a hospital’s operating room procedures, and a transportation system for a future colony on Mars were among other projects showcased at the event, which was held May 3 at the Shalala Student Center.

During the exhibit, several students like Feuer and other attendees stopped at the ParaMove table, strapping down the controller and moving their wrists to manipulate the worm.

“We could have done something in a lab,” said Golnoosh Goltapeh, one of the ParaMove team members. “But we wanted to get to the heart of biomedical engineering. So we created a device and pointed it at a problem that doesn’t really get attention and where there’s little innovation.

Goltapeh and his three team members — Grace Ghiazza, Nicole Navratil, and Tyler Schellenberg — interviewed patients at Christine E. Lynn Rehab Center for the Miami Project to Cure Paralysis, getting their thoughts on what would make wrist exercises more engaging. “They said they wanted something fun, something they could take home and do with family and friends or other patients,” Schellenberg said.

The four students tested their device on friends and classmates. But time constraints, COVID-19 protocols and clinical trial restrictions prevented them from trying it on patients.

“Research and development can take up to 15 years in some cases,” Goltapeh said. “We operated on a shoestring budget and came up with something that could potentially be a million dollar idea.”

Using various engineering methods to mitigate the effects of sea level rise in a long-standing Miami community is the focus of the capstone project by College of Engineering seniors Paul Spada, Ali Alqanaee, Yousef Alsaad, Bader Alshawaf and Anthony Milton.

The four designed a three-story mixed-use community center for the El Portal neighborhood of Little River, incorporating into their plan a ground elevation that matches FEMA’s 100-year floodplain projection maps. They surrounded their structure and a nearby park with vegetated areas and interlocking concrete pavers that capture and store rainfall. And they designed the building with a green roof and structural features that would allow it to withstand Category 4 hurricane-force winds.

“We applied the concepts we learned throughout our years at the College of Engineering,” Milton said. “Blending engineering disciplines allowed us to see problems from different perspectives and find new, innovative ways to solve them.”

If we ever reached and established a base on Mars, a transportation system developed by mechanical and aerospace engineering students Miranda Anhalzer, Yusif Gurbanli, Alexis Abundio and Johan Zambrano would allow astronauts to travel around the Red Planet. Their main design concept, A Transportation and Energy Ecosystem Based on the Martian Atmosphere, won the Best Project award at the expo. It is an electric-powered vertical take-off and landing aircraft that would be powered by converting energy from dust storms, which are quite common on Mars.

“There would be no road network on Mars if we ever got there. Thus, it would be better to travel by plane,” said the students’ faculty mentor, GeCheng Zha, professor of mechanical and aerospace engineering and director of the Aerodynamics and Computational Fluid Dynamics Laboratory at the College of Engineering.

“But flying on Mars is extremely difficult because the air is thin. The vehicles must have ultra-high coefficients of lift with high efficiency. project seems like the most promising way to get the job done,” Zha said.

This year marked the first time that Schonfeld sponsored the exhibit. “We are thrilled with our continued, long-term relationship with the University of Miami, and taking a leadership role in sponsoring the Senior Design Expo is a key step in solidifying this relationship,” said Jennifer Kaplan. , Head of Campus Recruitment and Diversity at Schönfeld. “We have already found strong talent at the University and are looking forward to welcoming several interns this summer.

/Public release. This material from the original organization/authors may be ad hoc in nature, edited for clarity, style and length. The views and opinions expressed are those of the author or authors.View Full here.