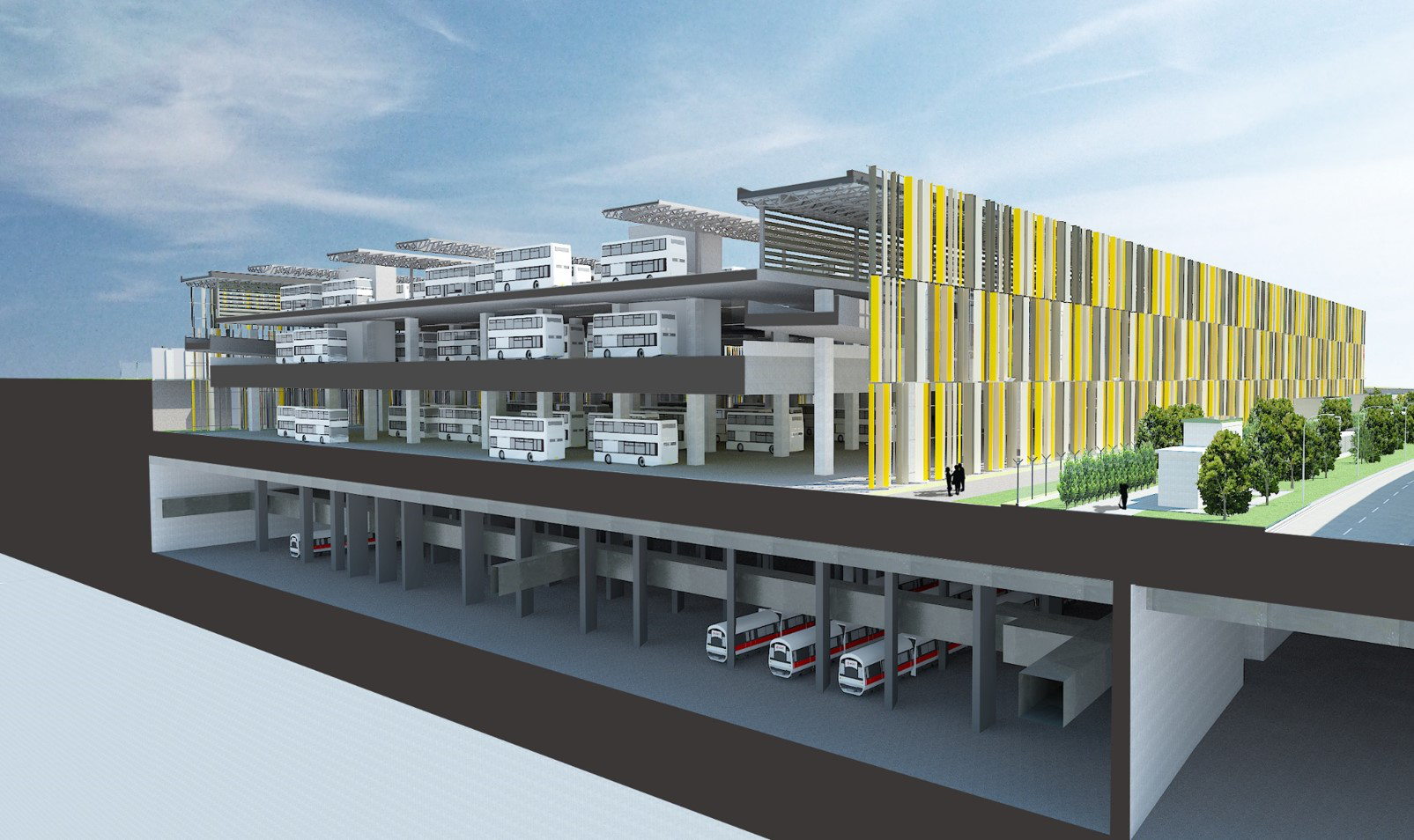 Kim Chuan depot, located in Hougang, Singapore, consists of an underground rail depot with a multi-story bus depot located above it. The depot provides maintenance, parking and operating facilities for the Circle Line of Mass Rapid Transit (MRT). When it officially opened in March 2009, the Kim Chuan repository was the largest underground repository of its kind in the world, with a total area of â€‹â€‹11 hectares. It is 800 meters long, 160 meters wide and 23 meters deep.

The Land Transport Authority (LTA), a statutory body under the Ministry of Transport that directs the development of land transport in Singapore, has decided to expand the existing Kim Chuan depot as part of a larger expansion project to provide additional parking and maintenance spaces for the MRT. system. Established in September 1995, the LTA is the result of a merger between four public sector entities: the Vehicle Registry, the Mass Rapid Transit Corporation, the Roads and Transportation Division of the Department of Public Works and the Land Transportation Division. of the Ministry of Communications. The agency is responsible for the planning, design, construction and maintenance of Singapore’s infrastructure and land transport systems.

LTA began planning their expansion project to provide a greener and more inclusive public transport system and used OpenBuildings Designer to streamline the process and complete the project on time.

Part of a greater expansion

The expansion of the current Kim Chuan depot was announced by LTA in tandem with the extension of Circle Line 6 (CCL6). The four-kilometer CCL6 will have three stations and will close the Circle Line loop by connecting HarbourFront station to Marina Bay station. This project is currently under construction and is expected to be completed by July 2026.

The CCL6 extension provided for an underground extension of the Kim Chuan depot to nearly double its capacity from 70 to 133 trains, increasing its dimensions to 1,000 meters in length and 160 meters in width.

The integrated depot will also house 550 field buses above the underground train depot and include washing and refueling facilities.

When all CCL6 stations are finalized by 2025, the Circle Line will have a total of 33 stations, including 12 interchange stations with other MRT lines and an extensive rail network. The railway will provide a direct route between the western areas and key employment areas in the central business district, as well as upcoming developments in the Marina Bay area.

The two main challenges the team faced were the limited timeframe of the project and the cross-collaboration on an integrated design across multiple disciplines across disparate locations. The team members wanted to make sure they had enough time to train their modelers on how to model the complex structure and architectural elements.

Benefit from interoperable applications With Bentley’s OpenBuildings Designer, the team saved time and improved collaboration, meeting project deadlines and bringing all participants together in a simple and collaborative way. OpenBuildings Designer provided a seamless transition for MicroStation users as it is built on the same open modeling environment. Its similarity to MicroStation meant that the training process for incoming modelers was quick and efficient since many modelers were MicroStation-based writers.

Modelers quickly learned to perform fast and complex geometric modeling in OpenBuildings Designer. Additionally, since OpenBuildings Designer is a single integrated application for architectural, structural, electrical and mechanical engineers, the project team was able to save time during the development phase of the design as they were able to design quickly. complex buildings and effortlessly integrate interdisciplinary designs. These combined time savings allowed LTA to meet design deadlines on time.

To improve collaboration, the team created iModels with OpenBuildings Designer to share information with all parties involved. By using iModels, the team was able to continue working in a mixed environment, using both Bentley applications and other third-party software. OpenBuildings Designer allowed the LTA project team to reference models from other organizations while retaining their properties. This interoperability aided for coordination and interference detection purposes.

Reduce the environmental impacts, time and cost of the project

By using Bentley technology to convert other models to iModels, the project team was able to easily reference designs in OpenBuildings Designer and have fully coordinated Structural Dynamics (CSD) models. This improved coordination and eliminated design errors and costly construction rework. The team built high performance assets and were able to reduce environmental impacts by improving the performance of building assets, such as its energy consumption.

Overall, OpenBuildings Designer has helped LTA reduce lead times, thereby lowering the cost of final delivery. As with similar projects, most of the time and costs of the project are wasted in managing the specific modeling capabilities of various disciplines and in the lack of an application capable of carrying the project through the lifecycle.

OpenBuildings Designer, however, includes BIM processes that fully integrate all disciplines. The different disciplines no longer worked in separate silos; instead, they were all combined in real time during design development. The application is designed to support the project throughout its life cycle, from design to use and maintenance, which brings added value to the design team and the owner.

Transportation services to use the new system – The Daily Evergreen