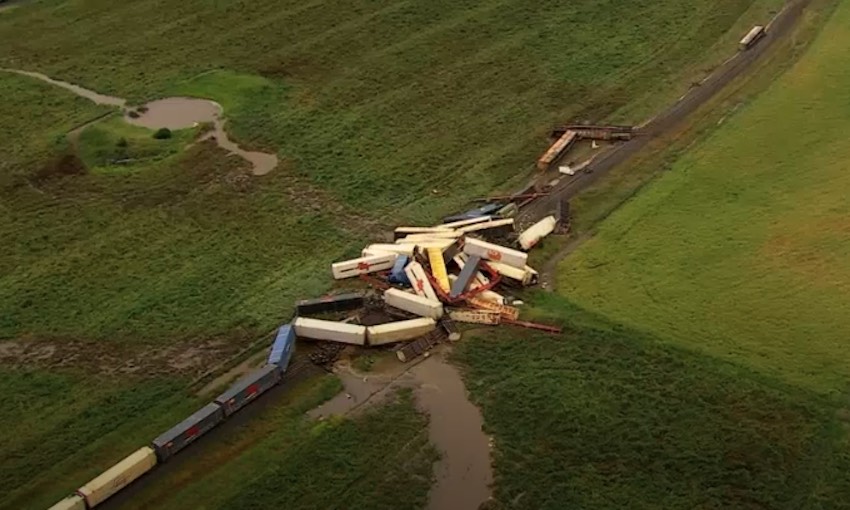 WORK is underway to restore a rail corridor to service following the derailment of a freight train on Monday 14 November.

The train derailed around 5.30am Monday morning between Inverleigh and Gheringhap (west of Geelong) after overnight heavy rain.

The incident left a mess of mutilated shipping containers on the tracks and in the surrounding paddock. The Melbourne-Adelaide rail corridor has been closed as a result.

Reports suggest authorities are now working on how to remove the derailed train carriages. There would have been 55 cars on the 1.7 kilometer long train.

The Australian Rail Track Corporation said it had started work on a plan to relaunch the line.

“ARTC has appointed a dedicated recovery team, with the support of our contractor partners, to undertake the recovery work,” an ARTC representative said.

“ARTC had already assembled approximately 30 workers at the incident site this morning and expects to significantly increase the workforce at the site as work progresses over the next few days. .”

The rail company said it has mobilized heavy machinery to the scene to support the repair work. Work is underway to bring the line back into service.

“Work has now begun to clear the tracks, assess the damage and begin the task of repairing the track,” the ARTC representative said.

“Our initial assessments indicate that one kilometer of track has been damaged, its repair will require the delivery to site and the installation of new ballast, rails and concrete sleepers.

“ARTC is working with our contractors to get the track operational as soon as possible, but at this stage it is difficult to set an exact timetable for the reopening of the track.”

The Australian Transport Safety Board took control of the site on Monday and launched an investigation into the derailment.

No one was injured during the accident.