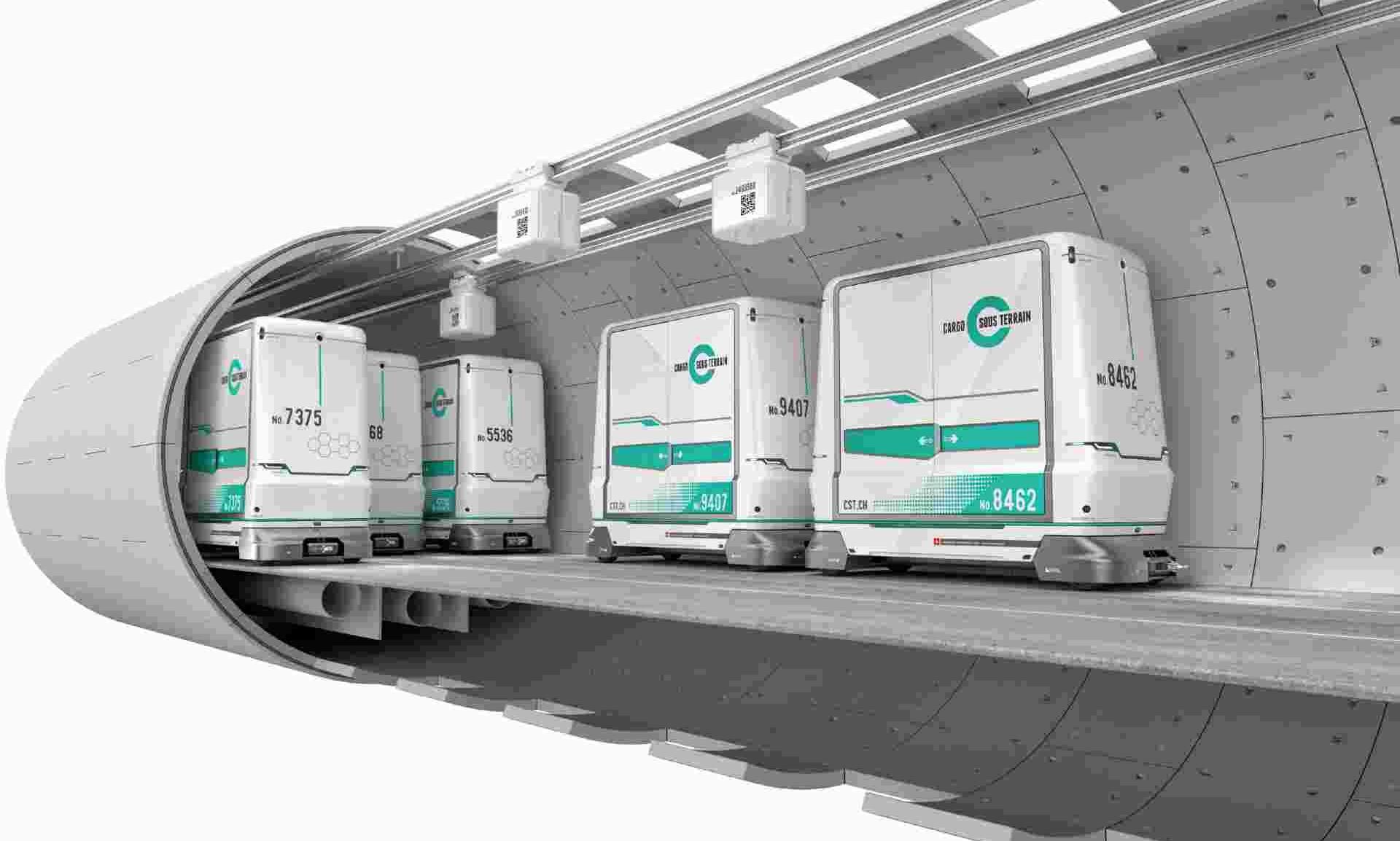 Switzerland is preparing to make headlines in 2031 with the Cargo Sous Terrain (CST) automated underground freight system, which will connect major Swiss hubs. CST aspires to relieve pressure on road and rail networks, reduce environmental impact and ensure timely delivery of products to everyone.

A continuous flow of goods will be transported on a pallet that can accommodate medium-sized parcels such as food and small furniture, as well as a pallet carrying smaller parcels from the roof of the tunnel.

Zinal Dedhia from The STAT Trade Times spoke with Patrik Aelling, Head of Communications, Cargo Sous Terrain, to learn more about the cargo transportation system plan, investor interest and the benefits of such a cargo and parcel delivery system .

Tell me about underground autonomous freight delivery.
A group of people in Switzerland came up with the idea. On the one hand, engineers provided the technological solution, while business people said that we must ensure that our supply chains remain operational in the future and develop a sustainable solution for transporting goods.

That’s when the engineers came together with the consumers and users of the system and of course you needed some form of funding to get this thing started. And, of course, financing is something quite easy to obtain in Switzerland.

We have come a long way and demonstrated that the system is technologically, legislatively and geologically feasible. With a competent business strategy and sufficient funding, we have demonstrated that the market is indeed ready for a solution like this. We have advanced one step at a time, and yes, we are getting closer. I mean, it’s still 10 years from now, but we’re making fantastic progress.

In which region of Switzerland will the first autonomous underground goods delivery system be deployed? You are aiming to start operations in 2031, what stage are you currently at for this project?
The CST project will be implemented in the northern part of the Alps, which covers about 80% of the country’s population, and it will be the whole region of Switzerland which will connect the major cities from west to east in the north and on the border south of the Alps.

We are currently building the first leg of this whole network, which will connect Zurich to the main logistics center in a small town called Härkingen-Niederbipp, at a distance of around 70 kilometres.

We have come a long way in this planning stage; we know where the tunnel will be built and where the hubs or connection points will be located. So we are in the middle of this planning phase, which will take another two or three years until we have a solid base to start construction in 2025 or 2026.

Can you explain the importance of sustainability with the project?
One of the main objectives in setting up the system was to ensure its sustainability. From an environmental point of view, the main idea was to create an area that could free up space above ground as the infrastructure reached its capacity. We cannot create routes; we can’t even build as many railway tracks as we would like due to space constraints. The main purpose of the system was to provide more reliable transit, not necessarily a faster mode of transportation.

By developing this new underground infrastructure, you would alleviate several difficulties such as traffic jams and road closures. To power our system, we will only use sustainable energy sources, primarily electricity. Accordingly, we have created each component of the system as sustainably as possible. We have also ensured, by having a life cycle analysis carried out by professionals, that each ton of goods transported with our system will be transported in a more sustainable way than any other mode of transport, including electric trucks and rail transport. , and that we will be the most sustainable system in the market when we open in 2031.

What kind of products will you take? What will the capacity be?
Anything that fits on a pallet. This may include food, small furniture and digital products, and we will also have special containers for the transport of refrigerated goods. It’s pretty much anything with the proper proportions.

You can return recyclable items in the same system after delivery, so we will use it for that as well. The only items that are not allowed are really dangerous components such as explosives, as they require a completely different security system than what we have.

Will it be an intermediate service? What are the prices of each cargo range?
We were more interested in the middle mile service when we created a system since we had the notion of these big logistics hubs. But we soon realized that that wouldn’t be enough because if we only delivered to the outskirts of town and left the items, consumers wouldn’t be able to use it; they should handle last mile delivery themselves.

As a result, we have introduced last mile deliveries from these logistics hubs. We have integrated it into our operations. This will happen above ground in cities, with last mile delivery provided by suitable vehicles powered by renewable energy.

How advantageous will this system be for small parcels compared to drone deliveries?
Yes, this underground infrastructure will be useful, but the capability of drones is limited. Consider the same amount of cargo we can move through a 70 kilometer three-lane tunnel, then consider it being transported by drones. All systems that are designed for the future will have to work together. And, I believe there will always be room for the right solution in the right situation. However, we will never be the exclusive mode of transporting goods; you’ll also still have access to ground transportation. And that’s what defines a sustainable future when all of these components come together and each can utilize their unique abilities.

Was it difficult to obtain regulatory approvals?
These processes involving the government are generally slow in Switzerland due to the many levels of participation. The advantage is that once something is developed, it has a solid foundation. So we understood that it would take time. We haven’t been taken seriously for a while when others have asked us or said, “The idea of ​​an underground freight system may be visionary, but would you ever be able to make something happen? something like that?”

The government then imposed a variety of requirements, such as asking permission from the regional level where we planned to create this system. We also had to show that we could get the 100 million in Swiss francs. We achieve this by having signed binding letters of intent signed by all these companies that, if we reach a certain level, they would provide this 100 million Swiss francs. People then started to take us seriously because of these investments.

Do you have investors? Who funds the project? How much investment have you received?
CST has more than 70 companies investing in it. But, of course, there is a range from very small companies, to expert companies wanting to be part of the system that only hold two or three shares, all the way up to large ones. To date, we have acquired 100 million Swiss francs. It’s about the same amount of money we have so far, allowing us to fully enter into this planning phase. To complete the plan, we will need 3 billion Swiss francs to build this first leg, which is a significant sum.

The further we go, the more realistic we become and the easier it is to attract new investors. And right now, we are gathering the money, to figure out how we can make this financing of 3 billion Swiss francs work. I have to say that we are also making good progress in terms of system planning and development. So far, everything is going as planned.

What level of sophistication do you have for your digital infrastructure, given that the entire system will most likely be fully operated and controlled digitally? What are your ideas about investment, research and the attention you will devote to it?
Scanning is an important part of the system. We will invest hundreds of millions of Swiss francs in the development of the digital platform over the next few years. An important advantage of CST is that we have several companies as investors which are usually competitors. Different retailers are collaborating for CST, but also logistics companies that are one-way competitors collaborating to develop this platform, and I think that’s a huge opportunity for us to really create a platform where different suppliers can provide their services, both via the tunnel and through the digital infrastructure. I believe it has the potential to become a digital marketplace where various providers can even establish entirely new services. It will be exciting to see where we go with the development of this digital platform.

In the long run, how will this help balance supply and demand?
I believe that the most important step will be to develop this system. It also requires visionary thinking, a bit of courage and some investment. I believe that if we can demonstrate that this is feasible, it should serve as a model for many other initiatives. Other underground transportation projects exist around the world, the best known of which is the Hyperloop, which began with a focus on passenger transportation.

Of course, what you can accomplish underground is not completely unlimited, but I think it’s a step we need to take not only in logistics and freight transport, but also when we develop our services in our cities. To keep everything on the right level, some things are underground, some are above ground, and some are also above ground. I believe it can play a vital role in building future sustainable smart cities.

Are you going to build the cargo containers and refrigerators yourself or have you partnered with another company?
With all the technological components, we look at what is now available on the market. It is possible that we collaborate with a company that develops exactly what we need. But I can assure you that we are always open to collaborations. We are not looking for exclusivity; rather, we aim for inclusion. Inclusion is the basis of the system.

The Rupsha Railway Bridge will have a lifespan of 100 years; a challenging feat of engineering: Official