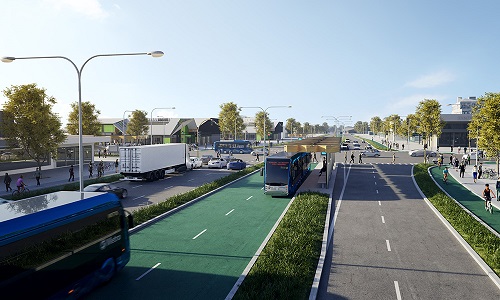 The National Land Transport Program 2021-24 (NLTP) was released on September 7, 2021. It describes the investments planned by the transport agency Waka Kotahi NZ over the next three years.

Mr Wood said the NLTP will boost economic recovery by supporting thousands of jobs across the country.

â€œTogether with local government, we will invest a record $ 24.3 billion in transportation services and infrastructure over the next three years, a 44% increase over the past three years and 75% more than the previous government. Our government has listened to the concerns of local government and communities and we have stepped in to provide $ 2 billion in funding to boost road maintenance and public transportation. We could not accept that our roads were deteriorating, â€he said.

Mr Wood said New Zealand must continue to reduce emissions and traffic congestion by giving the Kiwis more transportation choices. This NLTP marks a sea change with nearly $ 6 billion invested in public transport, walking and cycling, an increase of around 40% from the previous three years.

â€œTo further reduce emissions and help freight move efficiently, the NLTP is providing $ 1.3 billion to implement the New Zealand rail plan and $ 30 million to support cabotage. There will be further announcements on how this will support freight transport along the Blue Highway in the future. Safety remains a top priority for this government and we will invest $ 2.9 billion in our road safety plan Route to Zero to help prevent tragedies. This will include securing 17 high-risk public road corridors, with 51 intersection improvements, 25 new roundabouts and 164 km of security barriers, â€he said.

Mr Wood said about $ 7 billion will be invested in the maintenance of local and national roads, which will lead to the renewal of about 7,000 kilometers of highway lanes and 18,000 kilometers of road lanes. local. The previous government reduced road maintenance expenses, so since taking office we have increased them by almost 50% to help bring our roads up to standard.

â€œOur transportation network is increasingly affected by severe weather events due to climate change, so in addition to our investments in road maintenance, an additional $ 3.9 billion will be spent on road improvements that will help connect communities, to ensure the reliable flow of freight. and improve resilience across the country. This will see important projects such as the Te Ahu a Turanga Manawatu Tararua highway and the Waikato highway completed, â€said Mr. Wood.

Full details of the investments made under the national land transport program, including detailed regional breakdowns, are available at www.nzta.govt.nz/nltp

About the National Land Transportation Program

The NLTP is funded by $ 15.6 billion from the National Land Transport Fund, generated from fuel excise, road user charges and other sources of revenue; $ 4.6 billion from local government, generated by Auckland’s regional fuel tariffs and tax; and $ 3.8 billion in other Crown investments such as the New Zealand Modernization Program and the Provincial Growth Fund.

The government has completed or advanced many projects over the past three years, including the following:

In Northland, we made a series of safety improvements including a new roundabout at Loop Road (north) and improvements at the SH1 / Portland Road intersection south of Whangarei; at the SH1 Tarewa Road intersection; and the intersection of SH10 and Waipapa Road. The one lane bridges from Northland to Taipa and Matakohe were replaced and new roundabouts were built at SH1 / SH11 Kawakawa and SH10 / SH11 Puketona Junction as part of New Zealand’s upgrade program.

Work progressed on the Ara Tuhono Puhoi Expressway in Warkworth, extending the existing North SH1 Highway 18.5 km from the Johnstones Hill tunnels to north Warkworth. When completed in 2022, the highway will improve access, reliability and safety to and from Northland, Warkworth and northeast Rodney.

The $ 250 million improvements to the Auckland South Corridor were completed to provide safer and more reliable travel, including more lanes, new cycle and walking paths, better safety gates and an upgrade to l Takanini interchange.

Papatoetoe’s new Puhinui Station has opened, a major interchange of buses and trains to improve travel to and from the airport and surrounding areas by providing more reliable and emission-free travel choices.

Te Huia, the new Hamilton to Auckland passenger rail service, has been launched.

The Huntly section of the Waikato Freeway has been completed and good progress has been made on the $ 607 million Hamilton section – the last section of the largest highway project ever in the area.

A series of safety improvements have been made along the SH1 Cambridge to Piarere to reduce the number and impact of severe accidents along this stretch of motorway.

In the Bay of Plenty, we completed the SH36 pedestrian and cycle bridge between The Lakes and Tauranga Crossing to create a safe connection across the national road; the Paengaroa to Rotoiti cycle path, providing a safe off-road link for cycling along a busy section of the SH33; the SH2 Woodlands ÅŒpÅtiki shared trail to improve safety and provide a path for pedestrians and cyclists under the Waioeka Bridge in Opotiki; and the Rotorua Urban Bike Trail to support the city’s economic development.

The Hawke’s Bay Highway has undergone significant safety improvements, including widening of the road, side and center gates and new overtaking possibilities, and the Watchman Road roundabout was built to improve traffic safety at one of New Zealand’s most dangerous intersections.

Over 163 km of roads in Hawke’s Bay have been made safer with a variety of shoulder widenings, center and side gates, rough stripes and line markings.

In Taranaki, we completed the $ 37.5 million Awakino Tunnel Bypass, part of the Awakino Gorge SH3 security and resilience enhancements to Mount Messenger, and initial security enhancements on SH3 between Waitara and Bell Block, including the removal of a passing lane and the installation of wide center lines.

Taranaki Highway of the Forgotten World

Work has started on improvements to the Taranaki Forgotten World Highway (SH43) funded by the New Zealand Regional Upgrade Program package. This included the completion of the reconstruction of a two-lane bridge over a damaged culvert on SH43 in Pohokura to restore the two-lane road.

The new SH1 Whirokino Trestle and ManawatÅ« River Bridge project between Levin and Foxton has been completed, improving the safety, resilience and reliability of this key freight route.

The Te Tuawai (The Spine) cycle path has been completed, providing a safe route across the Whanganui Town Bridge; and the new Upokongaro to City cycle path, part of the Mountains to Sea cycle path, from Ohakune through the national park to Whanganui.

The $ 7 million north and central sections of the Lower Hutt’s Beltway from Waterloo Station to the Hutt River; the $ 14.8 million Te Hikoi Arawera separate trail between Lower Hutt and Wainuiomata; and the $ 6.8 million Hutt Road cycling improvements, including the Kaiwharawhara Bridge and the Cobham Drive section of the Tahitai Trail.

Good progress has been made on the $ 1.25 billion Transmission Gully Highway and the $ 405 million Peka Peka to Otaki (PP20) section of the Kapiti Highway.

In the Top of the South, we completed Nelson’s Tahunanui Shared Trail, Tasman Shared Trail for Walking and Biking between Takaka and Paines Ford to improve safety along the SH60; and in Marlborough, a new bridge was built over SH1 over the Opaoa River, providing safer access for cyclists and pedestrians.

On the west coast, we built the new two-lane Ahaura bridge on SH7, replacing an old single-lane partial timber bridge to strengthen freight links, and opened the Croesus trail, of which 10 km is part of the 55 km of the Great Walk Paparoa Track. .

We completed Christchurch’s other two motorway projects – the North Corridor, with a separate shared cycle and pedestrian path and the South Island’s first multi-occupancy vehicle lane; and the last stop on the southern highway.

The realignment of Mingha Bluff, through Arthur’s Pass National Park, has been completed, dramatically improving safety and strengthening this key freight route from Canterbury to the West Coast.

Work has started on the final 5 km section of the $ 31 million shared trail that will create a safe link for walking and off-road biking between Port Chalmers and Dunedin.

A new alpine operations center has been opened on SH94 to house tunnel operations staff and the Milford Road avalanche and rockfall protection program team.