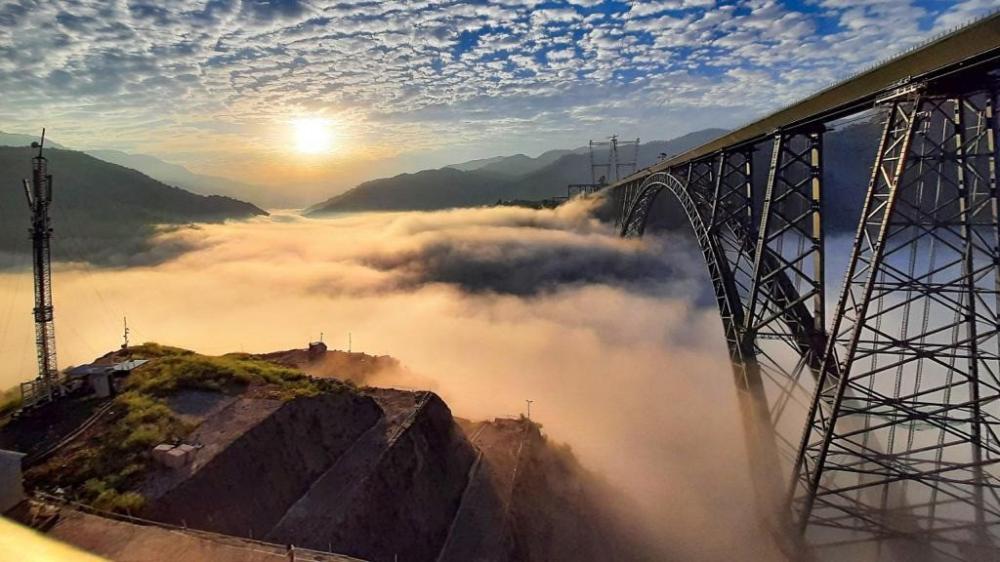 A feat of Indian engineering, the 1,315 meter long bridge forms a crucial link on the 111 km stretch from Katra to Banihal, which forms part of the Udhampur-Srinagar-Baramulla section of the Kashmir Railway Project.

The highest railway bridge in the world, the Chenab bridge culminates at 359 meters above the bed of the river, or 35 meters higher than the Eiffel Tower. The bridge is the key link to provide direct connectivity to the Kashmir Valley. The design life of the bridge is at least 120 years.

The Chenab Bridge has already taken enthusiasts by storm. Social media calls it “connectedness to heaven on earth”. During the monsoon, the bridge looks almost like something out of a fairy tale drowned in a sea of ​​clouds.

The photos of the bridge are so stunning that Twitterati checked with the Ministry of Railways to pre-book the train ride!

The Chenab Bridge is an engineering marvel as its construction continues in the face of several challenges. The project was designed and is being implemented despite the awareness of the challenges posed by the geology, difficult terrain and hostile environment.

Engineers and railway managers are at work with commitment and ingenuity despite gargantuan challenges in order to meet the schedule.

According to the managing director of Northern Railways, Indian Railways plans to link Kashmir with the rest of the country via the rail link by the end of 2023.

This project is India’s highest railway network – defying gravity on the impossible terrain of the Pir Panjal range. Indian Railways’ “Future Ready” rail system will surely be the next chapter in J&K’s glory, development and prosperity.

Surender Mahi, Administrative Manager of the Udhampur-Srinagar-Baramulla Rail Link (USBRL) project, said: “It was a very big project for all of us. To get here, we had to build 26 km of access roads with bridges and tunnels”. . Mahi said that by defying obstacles and challenges, engineers finally built the tallest bridge in the world and gifted this engineering marvel to the people of Kashmir.

This feat, according to him, was achieved with the technical support of several prestigious science and technology institutions in the country including IIT-Roorkee, IIT-Delhi, Indian Institute of Sciences – Bangalore, DRDO, National Remote Sensing Agency, GSI and other agencies. ”

The responsibility of linking the country through rail infrastructure over the dangerous J&K terrain in addition to the Chenab Bridge has been given to Mumbai-based Afcons.

The company is constructing another 16 railway bridges in the Kashmir Valley, all of which are part of a cost-effective and weatherproof USBRL project that will be a boon to the local economy.

Connectivity is the key to development. Kashmir was almost separated from the rest of the country due to poor connectivity, mostly inhibited by difficult terrain. This hindered the general development of the region.

Although road transport was available, it was a tedious journey for travelers. Through Indian Railways, the rail link will provide round-the-clock transport to and from the valley.

This cheap transport will usher in new developments in the region as it will facilitate transportation across India of all local products especially apples, handicrafts and art products consisting of warm clothes and wood. Although Indian Railways planned the rail link to Kashmir long ago, the administration has been pushing for the timely completion of all the projects since the repeal of Section 370, despite the related hurdles to the pandemic along the way.

The railway line also ushers in the development of surrounding areas which until now lacked even a basic road network. Indian Railways has constructed access roads over 205 km long, which include a tunnel and 320 bridges.

73 villages in the region that were previously only accessible on foot or by boat are now accessible thanks to this rail link.

The electrification of the 137 km Banihal-Baramulla corridor rail link, costing Rs 324 crore, with three main substations – Qazigund, Budgam and Baramulla – is another boon for the region.

This will not only reduce pollution in the region, but also save 60% of total fuel consumption at present.

Infrastructure development in J&K saw a strong boost after the repeal of Section 370 and since then the government has announced many development projects and policies in the J&K area.

The central government continuously pumps monetary resources and takes policy initiatives to rejuvenate the local economy. The National Highway Infrastructure Development Corporation (NHIDCL) is developing five tunnels in the region at a cost of $3.42 million. The tunnels will be accessible in all weathers and will be completed by 2024. Previously, the underdeveloped strategic highways had aggravated the worries of the agriculture and horticulture sectors in the region as the movement of fruits took an excessively long time to reach the market destinations.

But now that fear is giving way to hope as the government continues to build major highways as a priority. These connectivity projects are expected to bring development and prosperity to Kashmir as well as business and job opportunities for young Kashmiris.- IANS