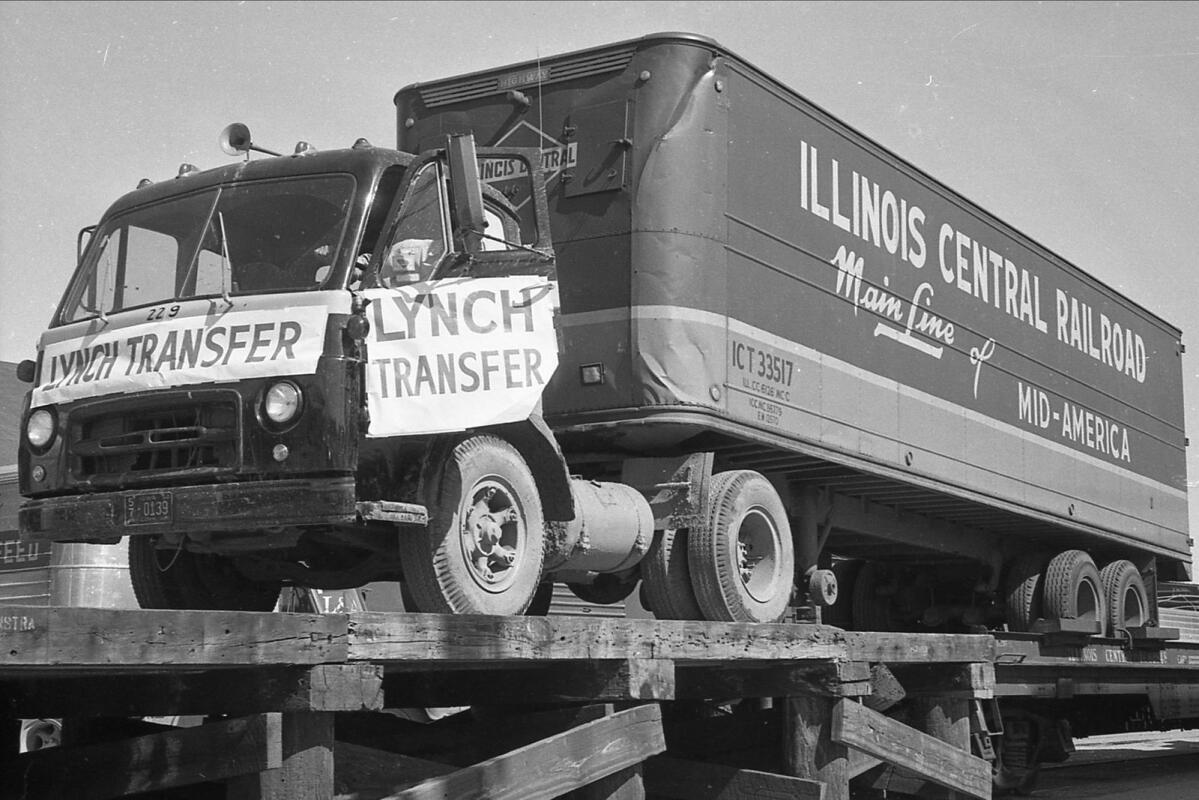 Time Machine: When truck cargo is “piggybacked” onto flatbed cars

An Illinois Central Railroad truck trailer is chained to a flatbed car after being loaded with a shipment of lard in April 1960 from Wilson & Co. in Cedar Rapids. The first “piggyback” shipment out of Cedar Rapids was destined for the Caribbean. (Gazette Archive)

The idea of ​​piggybacking – transporting truck trailers on flatbed wagons – may have originated in the late 1800s with the circus trains crisscrossing the country. Some of the flatbed cars on these trains carried “piggyback” style circus vehicles.

On the Great Lakes, ferries had been carrying entire trains from port to port for years when, in the early 1950s, the railroads and trucking industry cautiously embarked on a “multi-million dollar experiment called Operation Piggyback,” according to a United Press article. .

Semi-trailers were loaded with goods, then put on flat cars and transported long distances by railroads.

“In Kansas City, for example, a tractor truck backs a trailer loaded with cargo up a special ramp on the Missouri-Kansas-Texas Railroad,” the story reads. “The driver puts the trailer in place on a flat car, uncouples it and drives off in his cab. In Oklahoma City the next day, another driver backs his cab up a ramp, picks up the trailer, and hauls it to provide urgent door-to-door delivery work.

The same report pointed out that American Federation of Labor Teamsters President Dave Beck, who was Jimmy Hoffa’s predecessor, had mixed feelings about the piggyback ride, as did his union.

“It has a definite place in the future of transportation,” he said. “But it should only be used when it is the most efficient means of transport for the shipper.”

The idea is gaining ground

In November 1954, the North Western Railroad announced the expansion of its piggyback service between Chicago-Milwaukee-Waukegan and St. Paul-Minneapolis. The service was already in use on the North Western line through Cedar Rapids.

Using its own trailers, North Western picked up the shipments, loaded them onto the flatcars and shipped them by rail to the nearby town, where they were unloaded, strapped to semi-cabs and driven to their destination.

A trailer full of lard was one of the first Illinois Central Railroad piggyback shipments from Cedar Rapids. The Wilson & Co. cargo departed on April 22, 1960, bound for the Caribbean. Illinois Central Route was the first to have its own trailers operating out of Cedar Rapids, although other railroads had inbound piggyback service. Jim Patten drove the Lynch Transfer tractor that moved the lard trailer from the Wilson plant to the flatcar. (Gazette Archive)

The Illinois Central Railroad hired Lynch Transfer and Storage to transport the truck trailers for its piggyback service in Cedar Rapids.

In April 1960, a Lynch tractor moved a truck trailer filled with 30,000 pounds of Wilson & Co. lard onto a boxcar—the first out-of-town shipment using the piggyback method. The lard was destined for the Caribbean.

The Rock Island had been the main piggyback provider, with seven or eight trailers entering the city each week but none leaving.

Milwaukee and Northwest Roads had not yet established piggyback service in the Cedar Rapids area.

In two years, from 1958 to 1960, rail shipments of new cars doubled and cost manufacturers far less than having new vehicles delivered by truck.

The long freight trains piggybacking these new cars worried the Teamsters, prompting the union to take action to recoup some of its trucking losses. The union attempted to increase the cost of piggyback transport by negotiating a contract for $5 for each trailer loaded on a railcar.

The railroads claimed the Teamsters were lobbying the Interstate Commerce Commission and Congress to pass laws limiting the use of piggybacks.

The union, in turn, noted that states were losing money in fuel taxes by using piggyback rides instead of trucks.

The industry has adapted. Teamsters truckers were always a vital part of the overall picture as trailers full of goods had to be unloaded and driven to delivery points at their destinations.

Watch a sideloader put a trailer on an intermodal railcar at a Conrail yard in Worcester, Mass., in the late 1990s.

The 1980s brought containers, sometimes stacked two or three on wagons. The containers were then transferred onto trucks at the destination points.

JE Anderson (left), district traffic manager for Wilson & Co., and Illinois Central Agent Jack Gorman look on in April 1960 as a trailer carrying 30,000 pounds of Wilson lard is moved onto a boxcar of Central Illinois. It was the first piggyback shipment to leave Cedar Rapids. (Gazette Archive)

A Chicago and North Western Railway photo from March 1954 shows flatbed cars carrying semi-trailers. The railroad used the “piggyback” method to move freight through Cedar Rapids in the 1950s and 1960s. (Public domain)

GadCapital: The Basics of Transportation Financing