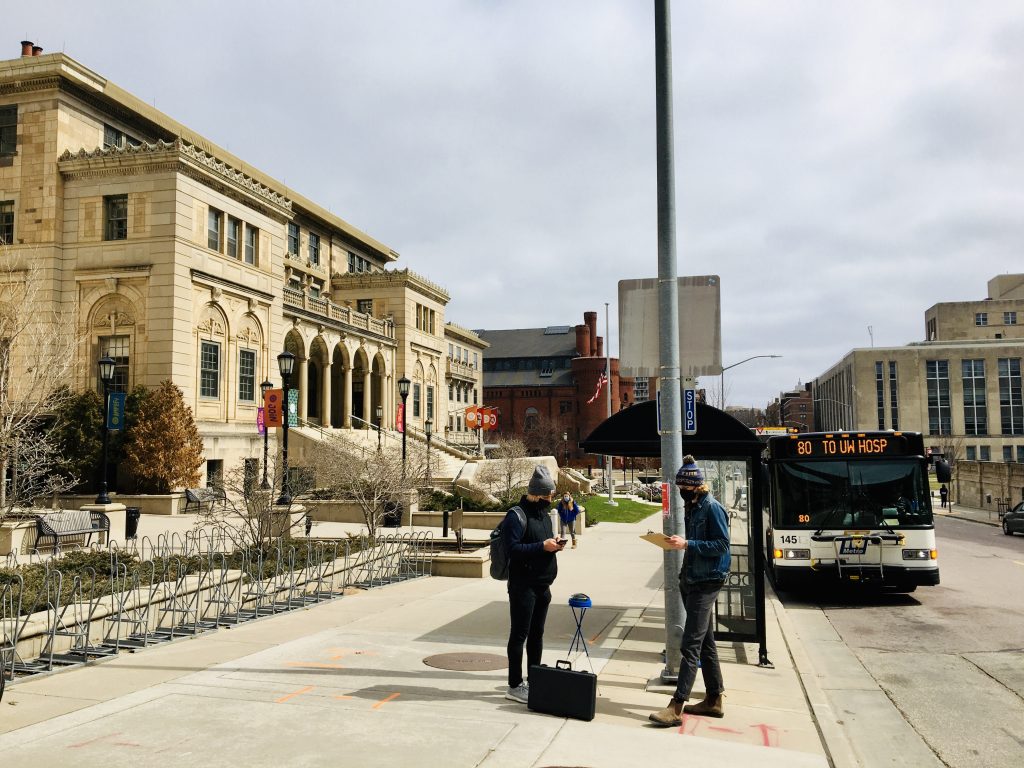 While it handles arrival times, bus stops, repairs, signage, parking lots, road closures, permits, tickets and special event parking – all the tedious and necessary aspects of transportation in common – transport services also create experiences. It may seem unusual to consider standing at a bus stop as an experience: waiting, pacing, flipping through your smartphone, looking for the next route. But Dar Ward, transportation solutions manager at Transportation Services, is working to improve the transit experience by “adding transit amenities,” which “should encourage people to use transit.” and “dissuade them from driving”.

Recently, Ward was developing a project to install screens with real-time arrival information in campus bus shelters. The concept was all about convenience – passengers wouldn’t have to worry about an infrequent bus arriving, repeatedly checking bus schedules, or boarding a crowded bus when another arrived under little. The problem with installing the screens, however, was the power supply: electrical wires would have to be extended from a nearby building, which would be difficult, expensive and require numerous approvals.

This conundrum led to the Solar Bus Shelter Project, a collaboration between transportation services and two student organizations: Helios, which focuses on the sustainability of solar energy, and Enactus, a national organization that seeks to use entrepreneurship for the benefit of social causes. Tanner Wagner-Durr, project leader of Enactus’ Sol Solutions Committee, and Simon Brooks, president of Helios, met at a sustainability event and agreed to collaborate on the energy project solar. The organizations filed a joint submission to the Office of Sustainable Development’s Green Fund, which connected organizations with experts on campus, answered questions, and awarded them a $1,400 grant to purchase equipment.

Following the study, which demonstrated the feasibility of the project, Transportation Services will begin installing solar panels, screens and lights on campus bus shelters in 2022, using $100,000 in funding allocated to sustainability projects by the physical UW-Madison factory.

The students began their study by gathering qualitative data: surveying and photographing the sites, listing stop IDs, and building a database to store the information. Next, they collected further data with their Green Fund-supported Solar Pathfinder – what their final report calls “a rather primitive-looking instrument” that allows sunlight to pass through a reflective dome onto a squared sheet of paper below, which corresponds to the latitude and longitude. . As Wagner-Durr explained, the hand-held device can “show how much sunlight it will receive throughout the day and at different times of the year.”

They also had to address aesthetics. Transportation Services had just completed a 10-year renovation of campus bus shelters and wanted to use curved solar panels to match the design of the shelter. “We didn’t want to go back and deface them in any way, so one of the things we were interested in was using a flexible solar panel that could bend over the existing round roof and… look like a part of the bus shelter,” Ward said. . “Not only were we interested in solar power, which you can just buy off the shelf, but we wanted to see the feasibility of this particular type of flexible panel.”

Mary Ebeling, Commuter Solutions Coordinator at Transit Services, had researched this question and found no studies describing the flexibility of solar panels versus flat panels for power generation.

“There are a few places in the country that have done something like this, but most of them haven’t done it exactly this way,” Ward said. “It’s a very traditional concept to take the pole that has the bus stop sign on and stick either a light or a real-time arrival display on that pole, with the solar panel on top of the post. But this idea of ​​putting it inside the bus shelter, there are only a few places that have done it.

The students, Ebeling said, “actually helped answer a question that the professional world had no answer to.” They used the National Renewable Energy Lab’s system advisory model to generate the comparative data, but adjusted it due to the paucity of research on curved panels.

“With the lack of research and academic publications, the software was optimized for flat screens, so we had to work around that,” said Atilla Veyssal, commercial manager of Helios. With support from Arganthaël Berson, a UW mechanical engineering professor, they approximated the curve of the panels by splitting the model line into four shorter lines that would allow for more data points.

“Curved panels, in the worst case scenario, capture less energy, but it’s not much less energy,” Brooks said. “Based on this, we are confident that the system can be powered throughout the year.”

The student study found that 51 of the 66 shelters could power a screen and lights with an average of 2.08 curved panels. Thirty of these shelters would only need one panel to generate enough power. The remaining 15 shelters would need three panels, as they are mostly in the southeast part of campus, in the shade of tall buildings and trees. The study also recommended motion sensor lighting for conservation and batteries for an energy reserve.

“A living laboratory for sustainable transport”

Once completed, the bus shelter project will enable Transportation Services to improve commuter experiences while reducing contributions to climate change.

“Because we have one of the lowest parking-to-employee ratios of any peer university in the country, we are a living laboratory for promoting sustainable transportation,” Ebeling said. “We experience changes in our climate in real time, so these small individual changes that people make when they choose not to drive or get an incentive parking permit and take a bus or a bike on part of the journey, these small changes make a difference cumulatively. It’s satisfying to know that we’re working on something small and immediately beneficial to our university and our community, but which also has wider benefits.

The students who produced the report also considered these effects. Although they study Mechanical Engineering and Materials Science and Chemistry and Finance and Information Systems and Economics (all hold at least two majors), they shared a motivation to apply their expertise to causes. durable.

“As Generation Z,” Wagner-Durr said, “we’re going to be the ones dealing with the effects of climate change, so it’s up to us to push for those societal changes and be as impactful as possibly.”

Students’ motivations respond to nostalgia and loss. Recently, Veyssal found himself talking separately with his friends and his sister about Lost Seasons in Wisconsin. They talked about how the seasons have changed, “especially in March and around Thanksgiving. We feel like Thanksgiving is much sweeter than before. There is much less snow in the winter because it is milder or too cold to snow.

“While the solar bus stop doesn’t necessarily replace the use of coal or natural gas,” Veyssal concluded, “being able to see that you can still efficiently power something that would be in heavy use is a good springboard for the transition. to larger applications.

Bp: and its partners award the first engineering contracts to advance major electricity and carbon capture projects in the UK